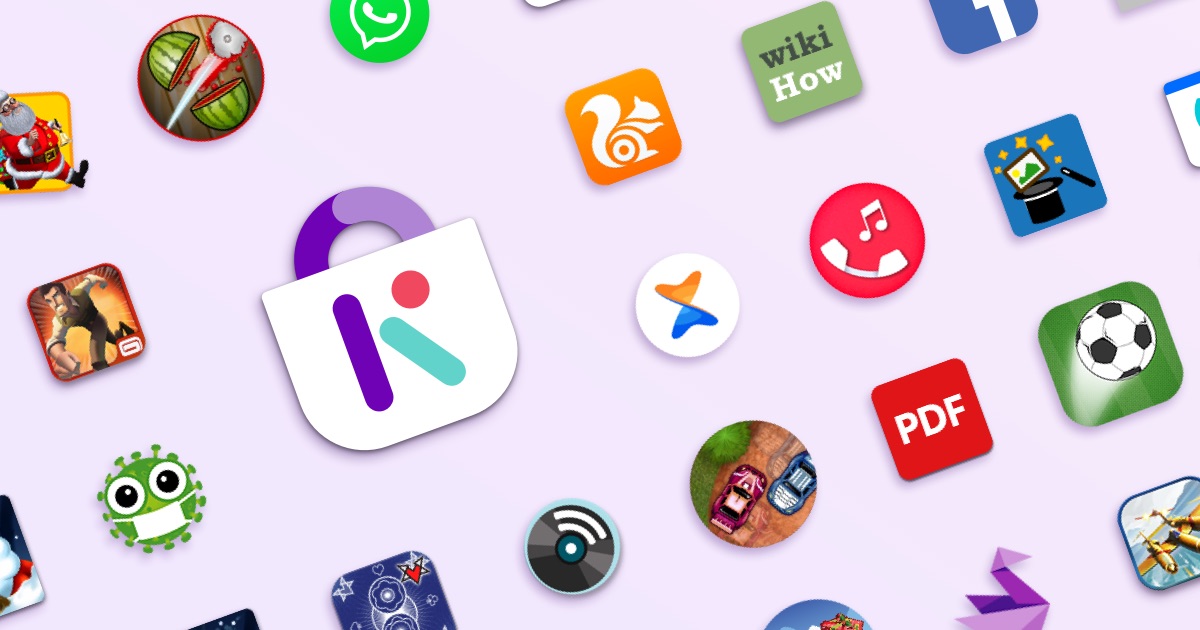 Lots happened in the KaiStore in 2020. We added new features and grew the collection of apps to more than 800, thanks to our developer community and the Ecosystem team’s tireless efforts.

Now that the year is officially behind us, we’ve compiled three app top 5 lists in the following categories for you:

To determine the most installed apps on KaiOS devices in 2020, we’ve looked at all the install data from devices outside of India (as those run their own JioStore). We’ve also excluded apps preloaded on most phones, such as WhatsApp, Facebook, YouTube, and the Google apps. Lastly, the list doesn’t include games, as we’ve given those their own category (see next section).

Here are the top 5 of most installed apps on KaiOs smart feature phones in 2020.

This browser provides a fast, all-in-one web experience and is a long-time favorite in emerging markets like India. Available on the KaiStore since October 2019, it provides a great way to explore the internet on a smart feature phone.

Since the dawn of mobile phones, people have loved to personalize their devices with ringtones. Smart feature phone users are no different, and Ringtones Free by indie developer Warren Miller is proof with an impressive third ranking in the 2020 installs.

To ensure a fast and responsive Twitter experience on KaiOS, indie developer Zhang Qichuan created Tweetfit. Using the public Twitter API, he has created an excellent tweeting experience for everyone on KaiOS phones, and Tweeps are clearly loving it.

We close the top 5 with a third indie developer. Bartlomiej Tadych realized many people need to open a PDF on their phones regularly. With his PDF Reader app, he optimized this experience for the smaller screens of smart feature phones, ensuring people can read their PDFs on KaiOS.

With 500+ games available in the KaiStore, we figured they deserved their own category. Here we see lots of innovation and exciting things happening, with both indie developers and a large studio present on the list.

Here are the top 5 of most installed games on KaiOS smart feature phones in 2020.

Car racing is what people love to do on their smart feature phones. In this fun and fast-paced game, the middle 5 button is your best friend. Use it to swap lanes and survive the incoming enemy cars driving right at you. Otherwise… a car crash and game over!

This runner game is the runner-up in our most installed games of 2020 category. Use D-Pad Up/Left/Right/Down or press 2/4/6/8 to make your character jump and dash through the jungle. Survive scores of obstacles in a lost city, and hold on for dear life when you reach the mysterious temple…

ANOTHER top three entry for developer Blacksheep Games! Besides Drift Rally at number one, smashing and slicing watermelons has brought their title 123 Fruit Smash the third position in this year’s ranking. In this game, you must smash the green watermelons and avoid hitting the red ones, all within the designated time limit. Do you have the ninja skills to win this one?

Alex Marc brings us 3D Football Pong Deluxe, which brings him this fourth place in our ranking. You’re up against artificial intelligence and have to put in as many goals as you can. How high can you get your score?

We’re not done with double entries in this year’s ranking. Gameloft also takes home another position, closing the top 5 with Siberian Strike. It’s a retro-style, aerial combat game in which you face off against challenging bosses in massive aircraft. Exciting combat and cool upgrades to make your planes stronger ensure hours and hours of fun well beyond 2020.

Popularity is only one way to measure. Fewer downloads don’t necessarily mean an app is not great. Naturally, our team sees and tries all the apps that come in; here are some of our favorites from 2020.

A complete photo editor with all the tools you need, like color adjustments, cropping, stickers, and filters. You can save the pictures and share them with friends and family. The app runs smoothly on all KaiOS devices, including those with 256MB memory.

The first podcast app designed and developed specifically for KaiOS. We especially like that you can listen online as well as offline. The developer also deserves a special shoutout for continuously improving and updating the app and putting in extra effort to support multiple languages.

An excellent and practical guide on almost anything, providing valuable knowledge to all people with KaiOS phones. We also partnered with the WikiHow team to create dedicated content for first-time internet users on how to use KaiOS smart feature phones.

The first app released on the KaiStore in March to provide COVID information to KaiOS users. The app is available in eight languages and provides the latest info and data from trusted health organizations.

A recently released game that’s clocking in an extraordinary amount of downloads. If the title was released a bit earlier in the year, we’re quite sure this one would have been in the games top 5. We’re not surprised, though, as developer X has created a portfolio of quality apps, with more than two 2 million game plays across all his titles in less than a year.

That’s it for 2020’s most popular apps and staff picks. We can’t wait to see what 2021 will bring. In the meantime, have a look at all the available KaiOS devices here in case you don’t have a smart feature phone yet. And if you got inspired and want to get yourself on the 2021 list, make sure to head over to this blog post: Learn to develop for the KaiOS operating system with these resources.

Is there a app that gives you turn-by-turn directions, for navigating in a car?

Give a try of Google map.:)