Why Koji is the perfect resource for beginner KaiOS app creators 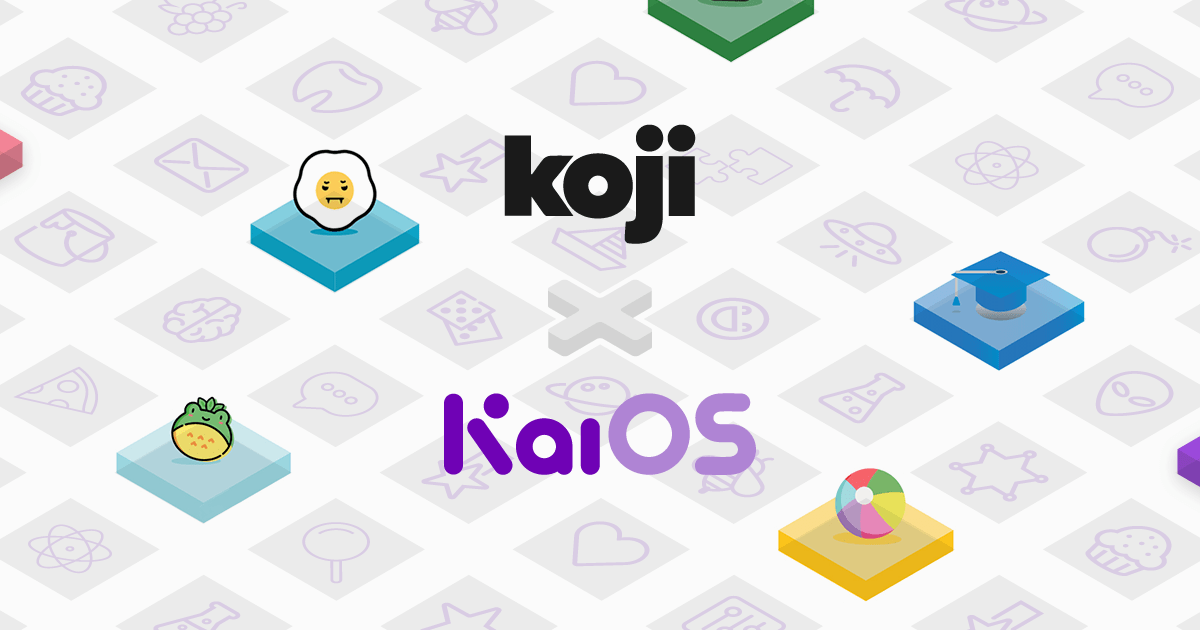 As of September 2019, Google Play and Apple had 2.4 million and 1.8 million apps to choose from, respectively. As app stores grow, so does the competition for developers. Whether you are just getting started as an app developer or are an experienced professional looking for a way to stand out – developing content for KaiOS is a great opportunity.
We continue to bring smart feature phones and mobile connectivity to millions of people in underserved markets around the world. Our new partnership with Koji makes creating content for those consumers simple, regardless of where you are from or your experience level.

Koji is a development platform available in six languages on which anyone, including non-technical beginners, can create apps. App templates developed by professionals can be “remixed” — including a variety of design elements such as images, colors, and sounds — by others without touching a single piece of code.
The unique remix capability, which can be done using an internet-connected mobile device in under 30 minutes, makes customizing apps quick, easy, and possible for those without access to a computer. The Koji platform also has an integrated live preview window where you can see the results of your app, which reduces the dependency on testing on real devices during the development phase and speeds up the development process. KaiOS and Koji are a perfect combination. While Koji aims to empower people around the world to develop apps, they recognize that many underserved areas lack the internet connectivity and devices required to do so. That’s where KaiOS comes in, making devices and mobile internet affordable and accessible. Together, KaiOS and Koji provide a way for developers, beginner or advanced, to share their content with emerging markets.

What does the partnership between KaiOS and Koji mean for developers?

This partnership paves the way for developers by providing a variety of valuable materials, resources, and support from both parties.

Remixing apps allows even absolute beginners (or “Makers” as Koji calls them) to get started with app development. Take the game app created with Koji by Jenise Spiteri, a professional snowboarder and YouTube vlogger. Spiteri used a photo of her face and recorded her own reaction phrases like “score!” and “radical!” to personalize the game for her audience.
“I thought it was very simple,” Spiteri said. “I didn’t really come into any problems, the platform itself and Visual Customization Controls (VCCs) for remixing a game were all super user-friendly. It’s like game developing for dummies!”
The vlogger leveraged her game to collect emails from her fans and drove engagement by awarding prizes to high scores.
Beginners like Spiteri enjoy both the ease and the speed of remixing apps. On average, it takes only 10-30 minutes to remix an app on the Koji platform. Makers simply pick an app template and use Koji to change VCCs to change colors, images, sounds, and game settings all without code.

While professional developers are welcome to remix apps, they can also create app templates by importing their JavaScript code into a Koji Project. The purpose of app templates is to allow Makers to easily swap out design elements, so it’s important for developers to build their code to include a variety of customizable VCCs.
Koji developer Svarog1389 used a fruit-slicing game example to explain this process. In his step-by-step tutorial, he demonstrates how to code VCCs, such as fruit images, sound effects, game settings, etc. Thanks to this coding, a Maker could easily remix the fruit-slicing game into a water balloon-bursting game by simply swapping in balloons for the fruit images and water splash sounds for the slicing sound effects.
Experienced developers can quickly learn how to create app templates with the help of the free Koji for Developers guide.

Whether you are remixing an app or creating a template, Koji and the KaiOS community offer ongoing support through a few different methods.
Documentation on Koji for Developers provides in-depth instructions for developing on the Koji platform. The Koji YouTube channel also features several tutorials made by Koji and their users, including 16-year-old Kumar Abhirup.
Abhirup created 10 apps in two months, eight of which are remixable templates. He encourages Makers and developers to appeal to international users by translating apps into different languages. His tutorial walks viewers through the process of changing the language and settings of a game with the Koji remix function.

In addition to these tools, aspiring developers and Makers can receive live support via the Koji Discord chat. The Koji team and fellow developers are available through a variety of channels, including a KaiOS-specific channel where you can chat with KaiOS chief architect Fabrice and software engineer Billy.

Koji also frequently hosts webinars during which they provide live guidance and respond to questions from attendees. Be sure to keep an eye out for KaiOS-focused webinars to learn how to submit apps made via Koji to the KaiStore.

Once your app has been submitted, you can benefit from increased exposure through both KaiStore app promotion and the Koji blog.
KaiOS shows recent apps at the top of the KaiStore, so developers can get their newly added apps in front of KaiOS users right away. Featured apps are also highlighted on KaiOS social media channels, blog posts, and on the recommended tab within the KaiStore.
Koji provides additional marketing support by highlighting apps on their blog and in the press. Media exposure is incredibly valuable for developers. Features can lead to more app downloads, higher traffic to personal websites and YouTube channels, plus increases in social media followers.
Stronbol, a 15-year-old YouTube gamer, experienced this firsthand when he became Koji’s first Hispanic influencer.
Stronbol surprised his followers with Torre De Stronbol, a remixed version of the Koji classic game, Tower Stack. He then launched a contest that offered prizes to users who created games about him. The result was over 90 fan-created games.

As affordable KaiOS-enabled smart feature phones enter emerging markets, millions of people are getting connected and using apps for the first time.
Devices running KaiOS are accessible in key markets such as Africa, Southeast Asia, the Middle East, and many Low and Middle Income Countries (LMICs). Developers who submit apps to the KaiStore can benefit from less competition compared to native app stores such as the Apple App Store or Google Play where apps can easily be buried among millions of others.
Developers who create content that appeals to audiences in emerging markets have an even greater chance of standing out. Luckily, Koji makes changing the language and even the text direction within any app simple. Language settings are set as VCCs that can be altered without any coding experience.

Professional and beginner developers have the chance to monetize apps hosted in the KaiStore after creating them with the Koji development platform.

Koji has enabled the opportunity for app template developers to get rewarded for their creations. Users can purchase Koji Pennies so that they can leave tips for developers. The Koji Pennies can then be cashed out for actual currency.
Professional developers also have the option to charge for extended help. If a less experienced developer requests additional guidance, professionals can charge hourly or project rates to provide it.

Both developers and Makers can develop apps with Koji and submit them to the KaiStore. Once their app is live in the store, they can earn money through in-app purchases and Kai’s advertisement solution, KaiAds.

A few apps have already been created using Koji, such as MatchCard and JiTimer. They are now available to KaiOS users and to Koji developers who want to remix them. In fact, we have used the MatchCard app and remixed it again to create a Christmas Memory Card game! The remixing capabilities allows developers to quickly build and deploy apps for different themes.

It showcases the capability of Koji and how developers can easily create seasonal or themed games for different markets.

All you need to get started with Koji app development is a mobile phone or a computer with internet access. Take a look at these app templates that work well on KaiOS devices. And check out this new tutorial video to learn how to create a KaiOS app using Koji.

Once you’ve created something you’re proud of, don’t forget to submit your app to the KaiStore. We can’t wait to see what you create.

Hello! Thank you for reaching out! Let me contact our engineers regarding it. I hope that the next update will improve the performance.

Hello! Thank you for your advice 😉 I will pass it to our engineers.